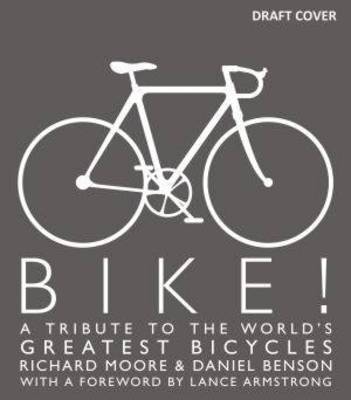 Bike!: A Tribute to the World's Greatest Bicycles

To many, the racing bicycle is a cult object, a vehicle of dreams, a marvel of engineering and aesthetics. With such enthusiasts in mind, Bike! is the first book to be produced on the history of the world's most famous racing-bike and component manufacturers. Within its pages you will discover the beautifully illustrated story of the artisans and visionary sportspeople who joined forces to create two-wheeled legends. From the cradle of road biking on the plains of northern Italy to the birthplace of mountain biking, Marin County, California, Bike! unmasks the soul behind names like Colnago, Shimano and Campagnolo. Distributed throughout the book are special double-page photographic features on ten landmark bikes that were the first to introduce groundbreaking technology, from Maurice Garin's Ondiana cycle in the first Tour de France of 1903 to the Team Sky Pinarello Dogma of 2010. Completed by sublime photography and graphic timelines, this book is the most striking tribute ever created to the craftsmanship, precision and speed of the racing bicycle.

Richard Moore is the author of In Search of Robert Millar and Heroes, Villains and Velodromes. Daniel Benson is the Managing Editor at Cyclingnews.com.