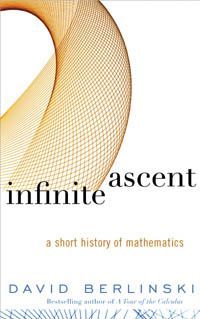 The most important breakthroughs in the history of mathematics. From the Renaissance onwards, mathematics has had a near-mystical status. If the pragmatic Romans, and Christian Europe, did not share the Greeks' fascination with numbers and geometrical shapes, the introduction of Arabic numerals, and the Greek mathematical discoveries kept alive by Arabic scholars, set off a new interest in mathematics which has been with us ever since. Berlinski focuses on the key moments in mathematical history - and the men behind them. H ere are Pythagoras, intoxicated by the mystical significance of numbers; Euclid, who gave the world the very idea of a proof; Leibniz and Newton, co-discovers of the calculus; Cantor, who opened the doors to infinity, before which all previous mathematicians had halted; and Godel, who in one magnificent proof placed everything in doubt and who discovered the algorithm which, along with the calculus, is one of the key ideas of Western science. With his ability to make abstract ideas concrete and approachable, Berlinski tells an engrossing tale and introduces us to one of the greatest of all human endeavours. First published 2005.