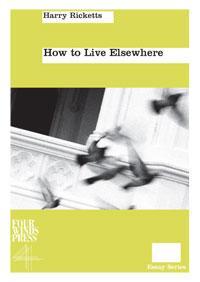 Ã¢ÂÂOvidÃ¢ÂÂs Tristia, my nomadic childhood, living now in New Zealand: these have set me thinking about the difference between exile and immigration. On the face of it, the distinction seems straightforward. Exile (like becoming a refugee) is usually compelled; immigration is usually voluntary. In her memoir My Invented Country, the Chilean novelist Isabel Allende widens the gap by claiming that exiles live in and for the past, while immigrants live in and for the future. The contrast seems clear enough until you realise that although Allende continually presents herself as a US immigrant, almost all the memoir is a loving recreation, reinvention, of the Chile she left in 1975 when Pinochet took power Ã¢ÂÂ hence the title. So, perhaps the distinction between exile and immigration is narrower, more tenuous, than it might seem. Perhaps it is a state of mind rather than anything clear and separate. At some subconscious level, what you learn from a peripatetic childhood (perhaps also from becoming an immigrant later in life) is that you donÃ¢ÂÂt have a homeland any more, you donÃ¢ÂÂt have roots as such. What you have instead, and itÃ¢ÂÂs not inherently better or worse, is a series of imaginary homelands. One of mine, ironically, is now the very prep school which was once a place of exile.Ã¢ÂÂ - Harry Ricketts