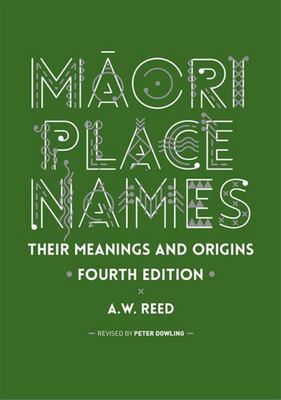 Pronounce and understand Maori place names with the new fourth edition of A.W. Reed's classic guide to meanings and origins of names across New Zealand. From Ahaura to Whitianga, this handily sized book is the definitive guide to over 2300 of the most common and notable Maori names on our land. Why do Whangarei, Tauranga, Motueka and Timaru have the names they do? Why all the fuss about the spelling of Whanganui and Rimutaka? What are the original names for Auckland, Hamilton, Wellington, Christchurch and Dunedin? Maori Place Names gives concise and clear answers, as well as taking in curiosities like the world's longest place name. The new Maori Place Names includes maps on the inside covers showing principal names, and also reproduces the illustrations from the original 1950 edition by renowned artist James Berry.

A.W. Reed (Alexander Wyclif) was born in Auckland in 1908, educated at Mt Albert Grammar School, and joined his uncle A.H. Reed's religious-supplies business in Dunedin in 1925. In 1932 he established the company's office in Wellington and began its book publishing business. Until his retirement in 1971, he was instrumental in building A.H. A.W. Reed into New Zealand's leading publishing house.

Reed filled many of the gaps in the book market himself, with a range of reference and educational works, and popular accounts of Maori culture. In all, he penned more than 200 books, including standard guides to place names of both New Zealand and Australia, Maori-English dictionaries, and collections of mythology. He died in Wellington in 1979.

Peter Dowling was brought up in Christchurch and educated at the University of Canterbury. He began his publishing career in the UK and Japan, then spent ten years at Reed Publishing (NZ), becoming publishing manager. He was the editor of A.W. Reed's Reed Dictionary of New Zealand Place Names (2002) and the fully revised Place Names of New Zealand (2010). The founder of independent book publisher Oratia Media, he is also publishing consultant to the Reed Trust, representing the late A.H. Reed and A.W. Reed.

Foreword to the 2016 edition