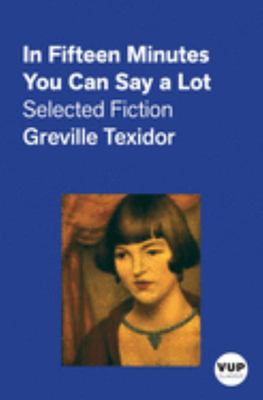 In Fifteen Minutes You Can Say Alot

First published in 1987 and reissued for the first time, In Fifteen Minutes You Can Say a Lot restores an essential New Zealand writer to new generations of readers. In Fifteen Minutes You Can Say a Lot begins with Texidor's most fully achieved piece of work, These Dark Glasses. Distinguished by sophisticated writing and acute psychological insight, it is set on the south coast of France during the Spanish Civil War. The stories which follow range from Spain and England to New Zealand, where she writes unsentimentally and unerringly of the environment of the time. Goodbye Forever, the unfinished novel which concludes the volume, is Texidors most sustained piece of writing on New Zealand. The central character, Lili, is a Viennese refugee who arrives amongst the writers of Aucklands North Shore. She is exotic and alone, and her slow collapse is plotted with minute observation.