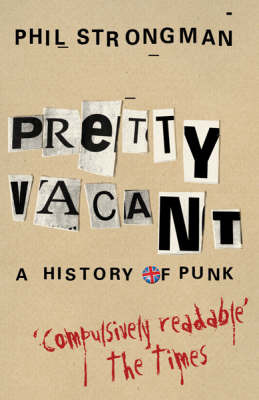 From the precursors of punk, through the famous Bill Grundy show when punk first hit the nation's consciousness to the modern-day heirs, such as Green Day and Busted, punk has evolved and taken over so many aspects of life that even banks now use punk lettering to appeal to their markets. In this brilliant account of punk, the authors have interviewed all the major figures to build up a complete portrait of a remarkable era of change in music and youth culture. Their story features Richard Branson, Malcolm McLaren, Vivienne Westwood, Tony Parsons and many more who took their early steps to fame and fortune around this time. Band members of The Clash, Stranglers, Sex Pistols and many others recall what happened, bringing their story to life with vivid anecdotes and telling detail. It is a book that no true fan of music can afford to be without, for this is the ultimate inside account of punk, told by those who really were there from the beginning. First published 2007.

The classic book on this subject, England's Dreaming, has sold in great numbers but is now almost 15 years old Interest in punk has never diminished thanks to its continuing influence on emerging musicians This is a lively, comprehensive book by a writer who knows the subject intimately 'Compulsively readable' Sunday Times

"Powerfully narrated and phenomenally well-informed, Strongman's book is less about punk as a street-level cultural movement than an epic account of its leading figures" Sunday Times "An accessible and entertaining account of a period that changed British culture" Choice

Phil Strongman was at the 100 Club in 1976 when the Sex Pistols first performed there, was an extra in The Great Rock 'n' Roll Swindle, and has known many of punk's greatest figures for many years. He is a journalist and author.