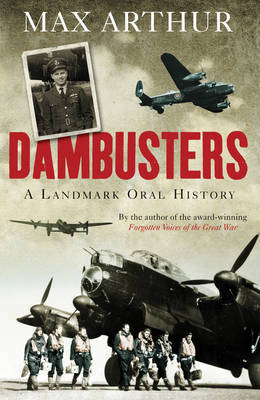 DoP - November 2008 - United Kingdom On the 17th May 1943, nineteen Lancaster bomber crews gathered at a remote RAF station in Lincolnshire for a mission of extraordinary daring and high risk - a night raid on three crucial and heavily defended dams deep in the heart of Germany. The raiders would have to fly across occupied Europe at low level and then drop their bombs, in the full glare of moonlight, at a mere 60 feet above the water. Eight planes never returned. Bestselling author Max Arthur gathers together first-hand accounts of the preparation, practise, organisation and the raid itself, and the sense of emptiness and loss at RAF Scampton when eight of the aircraft failed to return. From RAF personnel and civilians to Germans who witnessed the raid, this landmark oral history collection paints a moving and personal picture of one of the most famous operations of the Second World War.

ONE OF THE MOST DARING MISSIONS OF WWII, TOLD BY THOSE WHO WERE THERE

"Not only can Arthur make people talk; he also doesn't flinch from what he hears" Sunday Express "An extraordinary and immensely moving book" Stephen Fry, praise for Forgotten Voices of the Great War