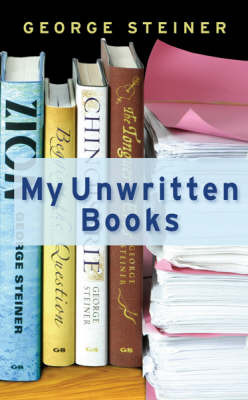 In this fiercely original and audacious work, George Steiner tells of seven books which he did not write. Because intimacies and indiscretions were too threatening. Because the topic brought too much pain. Because its emotional or intellectual challenge proved beyond his capacities. The actual themes range widely and defy conventional taboos: the torment of the gifted when they live among, when they confront, the very great; the experience of sex in different languages; a love for animals greater than for human beings; the costly privilege of exile; a theology of emptiness. Yet a unifying perception underlies this diversity. The best we have or can produce is only the tip of the iceberg. Behind every good book, as in a lit shadow, lies the book which remained unwritten, the one that would have failed better. Review: 'wonderfully compelling... these chapters also read as a mixture of fiction and scholarship' -- Bryan Cheyette THE INDEPENDENT "ardent for the joyfulness of learning. fierce for the personal significance of knowledge" THES "Anyone familiar with the erudite George Steiner will know that anything he writes on literature, philosophy or culture is worth reading" -- Jonathan Gibbs METRO "his failures, as he plummets from this dizzy height, are more grandly vertiginous than the modest successes of others" -- Peter Conrad OBSERVER "the ability to acknowledge and describe greatness in others is one of Steiner's most attractive gifts" -- Peter Washington LITERARY REVIEW "For those of us who can remember exactly where we were when we first read his greatest work, it is an extraordinary moment, a sense of an ending." -- David Herman JEWISH CHRONICLE "fascinating" -- Mark Bostridge INDEPENDENT ON SUNDAY "The fact that they have not been written is an unimportant oversight, a pardonable excess of modesty in such a joyful enterprise" -- Alberto Manguel The Spectator "This is all richly argued, meditative and yields intellectual nourishment and prompts admiration." -- Robert Giddings Tribune First published 2008.