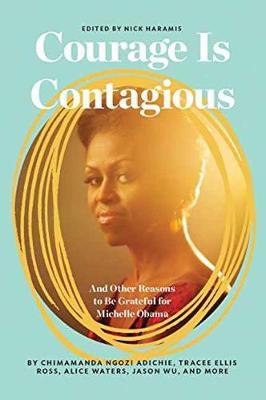 Courage Is Contagious: And Other Reasons to Be Grateful for Michelle Obama

Michelle Obama's legacy transcends categorization; her cultural imprint is as nuanced as it is indelible. She used her time in the White House to fight for women, minorities, and health and education advocates. At the same time, her own genre-busting style encouraged others to speak, to engage, even to dress however they wanted. In this tribute to the former First Lady, T- The New York Times Style Magazine editor Nicholas Haramis assembles twenty original essays from prize-winning writers, Hollywood stars, celebrity chefs, and politicos, all of whom have been moved and influenced by her extraordinary grace in power. This uplifting book uncovers the many layers of Michelle Obama as she continues to be a role model and icon in the age of Donald Trump.

Advance praise for Courage Is Contagious "Courage Is Contagious reminds us of the fortitude, brilliance, grace, humility, compassion, and humor of a woman we were so crazy lucky to have serve as first lady. This is an exceptional celebration of a most exceptional American."--J.J. Abrams "The first lady planted a powerful new knowledge inside of each of us. When you read this book you realize it's still in there and always will be."--Miranda July, author of The First Bad Manand No One Belongs Here More Than You "The diversity of the voices in Courage Is Contagious captures perfectly why Michelle Obama is so remarkable. If we can all see our best selves in her so vividly, how can we really be that different from each other? This glorious little book will give you goosebumps as it takes you on a journey celebrating one of the most important people alive."--iO Tillett Wright, author of Darling Days

Nicholas Haramis is a writer and the articles editor at T- The New York Times Style Magazine. A contributor to publications such as Billboard, Out, and The Wall Street Journal, he has interviewed everyone from Arnold Schwarzenegger to Meryl Streep. Prior to joining The New York Times, he was the editorial director of Bullett, and before that, the editor in chief of BlackBook. He lives in New York City, and until recently hadn't really considered moving back to his native Canada.