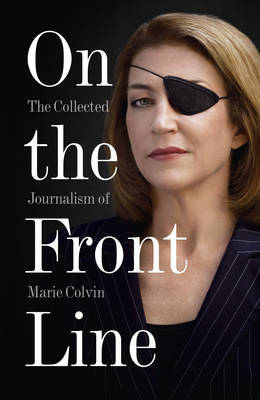 On the Front Line: The Collected Journalism of Marie Colvin 1986-2012

A fearless, passionate veteran reporter of conflicts from around the world, Sunday Times journalist Marie Colvin was killed in February 2012, covering the uprising in Syria from the besieged city of Homs. On the Front Line is a collection of her finest work, a portion of the proceeds from which will go to the Marie Colvin Memorial Fund. Marie Colvin held a profound belief in the pursuit of truth, and the courage and humanity of her work was deeply admired. On the Front Line includes her various interviews with Yasser Arafat and Colonel Gadaffi; reports from East Timor in 1999 where she shamed the UN into protecting its refugees; accounts of her terrifying escape from the Russian army in Chechnya; and reports from the strongholds of the Sri Lankan Tamil Tigers where she was hit by shrapnel, leaving her blind in one eye. Typically, however, her new eye-patch only reinforced Colvin,s sense of humour and selfless conviction. She returned quickly to the front line, reporting on 9/11, Afghanistan, Iraq, Gaza and, lately, the Arab Spring. Immediate and compelling, On the Front Line is a street-view of the historic events that have shaped the last 25 years, from an award-winning foreign correspondent and the outstanding journalist of her generation.

Tributes to Marie Colvin: John Witherow, Sunday Times editor: "She was somebody who was fun, full of life with joie de vivre and friends all over the world. During her time she saved many lives by highlighting the plight of victims of violence. Everywhere she had gone she tried to help people because she believed she was a witness to the violence that was going on and that she could make a difference." Peter Bouckaert, Human Rights Watch: "For Marie, covering war wasn't about doing a few quick interviews and writing up a quick story: she experienced war alongside those who suffered in war, and her writings had a particular vividness because of what she had dared to see and experience" Lyse Doucet, BBC: "The world will miss her because she was the eyes and ears of so many. Marie always admired the pioneering journalism of fellow American Martha Gelhorn. I always saw her as the Martha of our generation: brave and beautiful." Max Hastings, author of All Hell Let Loose: 'all her life, all over the world, she was drawn to record the experiences of civilian victims, who found themselves living and dying in a universe from which compassion and justice had been banished...Colvin was killed doing her best thing, in full knowledge of its perils...This collection of words is her most appropriate memorial because it so vividly explains why her peers admired her so much,.

Born in America, Marie Colvin (1956 - February 22, 2012) was an award-winning foreign affairs correspondent for the Sunday Times. An outstanding journalist of her generation, she covered the Middle East for more than 20 years and reported from East Timor, Chechnya, Kosovo and Sri Lanka, where she was wounded in an ambush and lost her left eye. She was killed while covering the Siege of Homs in Syria on the 22nd of February 2012.