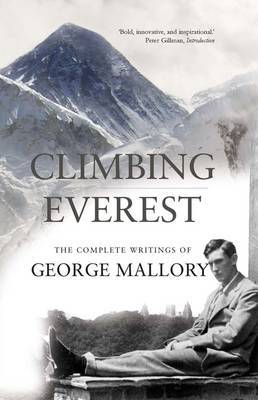 Collection of published writings on the Everest by George Mallory, the man who may have been the first man to reach its top 29 years before Hillary. George Mallory belongs to a short but distinguished line of literary mountaineers such as Joe Simpson, Jon Krakauer and Edward Whymper, the conqueror of the Matterhorn. He answered the questioned 'Why climb Everest' with the dry put down 'Because it is there.' In this book his published writings on Everest are collected for the first time.

George Leigh Mallory was the only climber to take part in all three of the British pioneering expeditions to Mount Everest in the 1920s. Born in 1886, he died a few days short of his 38th birthday, while making a summit attempt with his young companion, Andrew Irvine. Mallory was the son of a clergyman, an idealist and a romantic, and he was married with three small children. A schoolmaster by profession, he switched in 1923 from teaching boys to teaching adults, which he found very rewarding. During the Great War of 1914-18 he had served at the front as a gunner. He was a neat and bold rock climber and a competent ice climber, but his greatest assets were vivacity and a love of adventure. He would seize the moment and encourage his fellow climbers to follow. If he had a weakness, it was the failure to recognize when he had given enough. He was charismatic and absent-minded, which may have proved a fatal flaw.