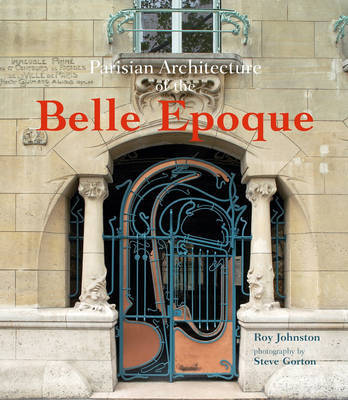 Parisian Architecture of the Belle Epoque

Turn of the century Paris is often referred to as the belle epoque, a golden age of affluence and artistic creativity before the turmoil of the First World War. This was the Paris of artists such as Bonnard, Rodin, Seurat and Vuillard, as well as writers and musicians such as Debussy, Zola and Maupassant. The Eiffel Tower had just been built and the Moulin Rouge was in its heyday - Paris was the cosmopolitan capital of pleasure and culture. The architecture of the period, however, has generally been neglected known only for the Art Nouveau designs of Guimard's Metro entrances and restaurants such as Maxim's. This book, based on a thorough survey of Parisian buildings of the era, connects the medievalism of Viollet-le-Duc, the classical tradition of the Ecole des Beaux-Arts and early developments in metal and concrete construction with modern pioneers like Perret, de Baudot and Sauvage.

"...stunning photography and fascinating text, it's an inspirational companion for a revisit to the city." (Bucks, January 2007) "... feels meaty without being ponderous. It slips easily into a weekend bag, and would enhance any visitor's pleasure of discovery." (Building Design. February 2007) "...a real insight into this exciting time including social and economic issues and it is illustrated with well-chosen photographs." (France Magazine, May 2007) "A visual treat".(Destination France Magazine, Summer 2007) "...hugely enjoyable book...Johnston writes evocatively and succinctly about a city he knows intimately...this is a fine account " (The Architects' Journal (cover date Thu 21st June) "With an enticing subject and an attractive price, this is one of the achievements of the decade in architectural history." (The Victorian, March 2008)

Roy Johnston is a professional architect. He has worked as an assistant in public and private practice and more recently as a senior partner in Trehearne and Norman, divided between the design of large modern buildings (schools, hospitals and offices) and restoration and refurbishment of historic buildings. The last few years he has dedicated to the study of the architecture of the Belle Epoque in Paris. Steve Gorton is an established photographer, with over 20 years' experience of working with publishers. He has photographed a vast range of subjects, though his quality of observation is particularly borne out in his observation of place and environment, whether natural or manmade. He is also the photographer of English Eccentric Interiors by Miranda Harrison (John Wiley & Sons, 2006).