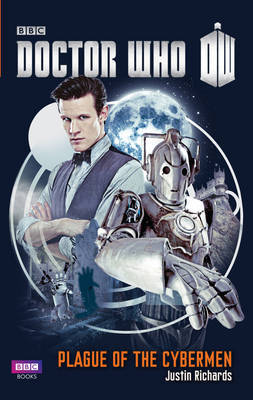 Doctor Who: Plague of the Cybermen

A thrilling, all-new adventure featuring the Doctor as played by Matt Smithin the spectacular hit series from BBC Television. "'They like the Shadows. You know them as Plague Warriors...'"When the Doctor arrives in the 19th-century village of Klimtenburg, he discovers the residents suffering from some kind of plague - a 'wasting disease'. The victims face a horrible death - but what's worse, the dead seem to be leaving their graves. The Plague Warriors have returned... The Doctor is confident he knows what's really happening; he understands where the dead go, and he's sure the Plague Warriors are just a myth. But as some of the Doctor's oldest and most terrible enemies start to awaken he realises that maybe - just maybe - he's misjudged the situation.

Justin Richards has written for stage and screen as well as writing novels and graphic novels. As well as writing extensively for children, he has also co-written several action thrillers for young adults with the acknowledged master of the genre Jack Higgins. The first novel in his adult SF series The Never War, titled The Suicide Exhibition, was published by Del Rey in late 2013. The second volume - The Blood Red City - will be published in 2014. Justin currently acts as Creative Consultant to BBC Books' range of Doctor Who titles, as well as writing quite a few himself. Married with two children (both boys), Justin lives and works in Warwick, within sight of one of Britain's best-preserved castles.